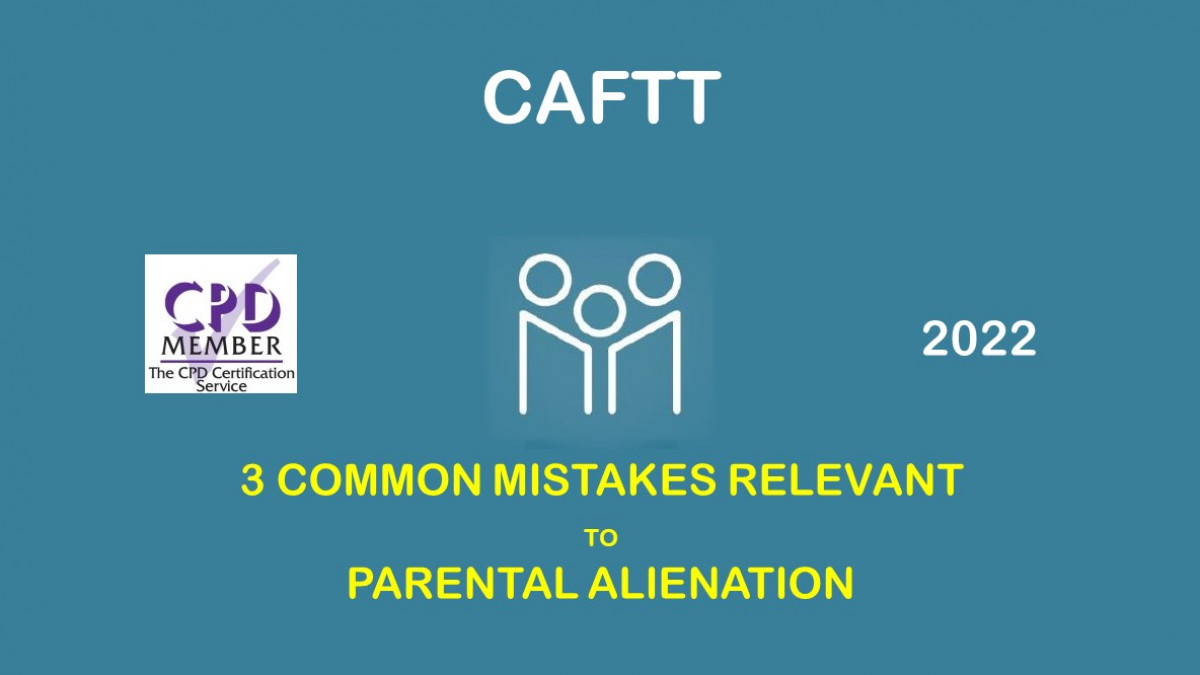 [1] Considering it as "Parental conflict"

For many reasons, some separated parents don’t get on. It's very likely that children are aware of any friction between their parents. One or both parents may not be willing or able to think above their emotions, and their behaviours against the other parent may be apparent to or even witnessed by their children. Under these circumstances, courts are likely to make orders for children to have parenting time with the parent they do not normally live with.

However, it's unlikely a UK court will immediately apportion parenting time evenly enough for a child to be able to keep recovering from the effect of either parent negatively influencing them against the other. The parent with whom the child normally lives gets the majority of the time. If that parent is negatively influencing the child about or even against the other parent, the typical parenting plan imposed by courts means this imbalanced influence can build up, with children vulnerable to becoming alienated at any time. The typical court plan is every other weekend and some overnight visits or stays, but if a child is being manipulated by the parent with custody, this amount of time with the other parent simply isn’t enough to protect the child against becoming alienated.

It can go the other way round too. If the non-custodial parent parent has less time with their children but stronger, wrong influence over them, they can also alienate children effectively, even if they have less time with them. The most common child age for this type of manipulation really embedding seems to be from around 7/8 years plus, but it can – and does- happen sooner at younger ages and later with older children.

In the early stages of alienation embedding in children, at whatever age, they can become affectively and emotionally dysregulated. At this point, enquiries may reveal the parents have a prior litigation history, they’ve been to court before over their children, and now have current if not long-term disagreement over parenting time schedules. It may well be that, by the time cases actually get to court, parenting schedules have been disrupted because the alienating parent, naïvely or actively, has decided to amend or perhaps even completely obstruct the parenting plan, even if it was made by a previous court order.

Notwithstanding that children may have previously been transitioning between their parents despite any apparent disagreements, the new "contact" problem may be expressed by professionals as rooted in "parental conflict." And, as we said in a previous post, it may be that only one parent is behaving unreasonably, but now both parents are labelled as damaging their children.

Professionals may not join up that the start of a child's dysregulation coincided with initial interruptions to the parenting plan, and is probably rooted in the lack of availability of an attached and beloved parent to the child. The child's problems are seen as ‘between the parents’ rather than emanating from one of them, with the other parent perhaps having been a more balanced buffer for the child's emotional health before.

These cases may then be deflected to the family court because local authorities do not see "parental conflict" as their problem where there is not considered to be any risk of significant harm to the children. Further, even where it is identified that one parent may be wrongly influencing their children, parental alienation is currently not considered to cross the threshold of significant harm as defined by section 31 of the Children Act 1989, despite the severe mental health disruption can it cause.

The real issue is that, especially where there is a prior vulnerability, parental alienation can express itself and advance extremely quickly. Any early failure to identify it and provide immediate respite for children is likely to end in alienated children never receiving any help at all.


[2] It's somebody else's job to help alienated children

The key treatment for genuine parental alienation is reunification with the targeted parent and enough time with them thereafter to balance out influences between their parents. The sooner the intervention, the less intensive it may need to be.

It's not uncommon for local authority social workers to put young children and their parents together in assessments. However, this tends to be after a child makes allegations that need investigation. The child-parent contact observation is not to resolve alienation but to see how a child responds to the presence of a parent under assessment or investigation, perhaps for allegations of abuse. However, if older children make allegations, local authorities seem unlikely to arrange and observe parent-child interactions. Local authorities may well have their reasons, such as knowing that treatment for alienation can be problematic. The issue, of course, is that an early window of opportunity to assist vulnerable children could be lost, and never compensated for.

Current policies express no obligation on local authorities, court welfare officers or even Guardian ad litems to reunite children with their parents, alienated or not, unless it is directed by the court. That in itself may be some further months down the line, if at all.

As far as preventing mental health problems developing and embedding in families, the standard approach adopted by some agencies towards these kind of issues can perhaps reasonably be seen as mistaken, and rather unfair to vulnerable children who are experiencing a process of manipulation against one of their parents.

Thousands of separated parents who believe they have insufficient time or have been completely cut off from their children seek assistance from family courts because they believe statute provides them – or their children - rights. This seems mistaken thinking on two counts.

Firstly, the Children Act 1989 merely states that courts should presume, in the absence of good reason to the contrary, that children will benefit from the "involvement" of both parents.

"Involvement" is not defined. It could be huge involvement or minute. In the UK, there is no presumption or guidance for any level of parental contact to a child, or a child to parent. If the non-resident parent is to achieve significant time with their children, the likelihood is that it will take several months or even years to build. The degree of parenting time achieved may not prevent a child becoming alienated where they face problematic levels of wrong influence from either parent against the other.

Secondly, when parenting plans need to be (re)established quickly, it’s perhaps not best to engage in arguments of a legal nature that give rise to debates and opinions that may take some considerable time for a court to process. There have been cases where it was indeed upheld, several years later, that a parent’s rights were abused, but they still didn’t get to see their children again.

Any parent who litigates at court on the basis of rights could delay any potential delivery of assistance a court may be minded to deliver to their children. The best approach is an evidenced-based one: immediately evidence the benefits a child so far had during a relationship; show that any negative changes in a child’s performances coincided with the interruption, disruption or even loss of that relationship; and how it would benefit a child to maintain relationships to both parents going forwards. However, that still doesn't guarantee any particular or swift performance by UK courts.


Taken in the round, these three mistakes: [1] in interpretation and labelling; [2] lack of any initial obligation for professionals to adequately assist; and [3] misled presumptions of desperate parents seeking assistance from the legal setting of the court on the basis of rights - all add up to huge vulnerabilities for children in terms of wrong services being allocated or court delays if they are enduring any process of manipulation by one parent against the other.


In our course, "Attachment-Led Theory and Practice in Parental Alienation: PA1", we delve deeper in regards to the above systemic issues, and much more.

Students completing the course will be introduced to the framework surrounding professional and systemic interactions with children during their various stages of parental alienation.

Family members who view our course may understand the litigation process and systemic issues clearly enough to orientate effective strategies within what can be a very counter-productive legal system.

Child professionals of all types may be able to more usefully deploy their offices towards active provision of services or advocacies leading swiftly to what really matters - that children will be considered the end users of any professional or court service, and correct, effective, pragmatic help is delivered directly to them - as soon as possible.