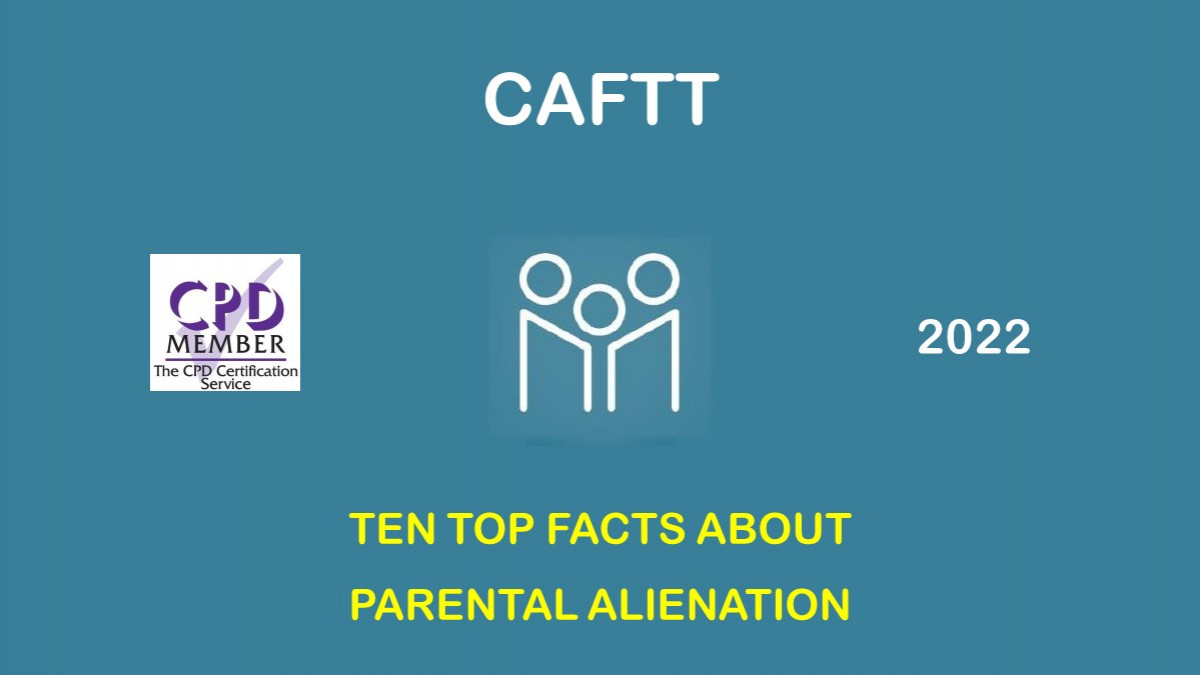 1. Parental alienation is a type of family and child manipulation

Perhaps the most effective definition of parental alienation is that it’s the process and the result of one person in a family wrongly, needlessly and negatively manipulating a child's thoughts, feelings and behaviours towards another family member (the targeted parent). Normally, it is one parent naïvely, actively or obsessively transmitting affective and/or verbal communication that may be absorbed and responded to by a child. As with all types of manipulation, it may be more effective at different times and situations. Some factors assist the degree and speed of a child’s alienation: time spent with an alienating parent, the persistence and intensity of negative communications and influence, and a child's degree of isolation from other influences: especially not having enough time with, or being isolated from the targeted parent, so the child does not have enough time with them to offset the influence of the alienating parent.

2. Children can be alienated by other family members too

Alienation can be an intergenerational problem. It's been observed in some cases that the main, wrong influence actually comes from grandparents or step-parents, who affect parents. Children in these circumstances are at more risk because of the increased reiteration and reinforcement of negative messages. Also, if an older child in the family is already alienated, it's par for the course that, in time, younger siblings will be too. It's been known for courts to transfer living arrangements of younger siblings to protect them whilst attempting to resolve alienation in older children.

3. Parental Alienation has mental health implications for all family members

Parental alienation touches the mental health of everybody in the family. Where it's mild or moderate alienation, it may be the product of parental insecurity and anxiety. In cases that will or have become severe, it’s associated with personality vulnerabilities and disorders. The targeted parent also often suffers intensely from a toxic, traumatic mix of ambiguous loss, worr,  and forensic stress if needing to litigate. Extended family can fall ill too. Alienated children are known to suffer from a range of severe developmental issues and mental health problems. The constituent psychological issues assessed to be present in severe alienation are splitting, triangulation, and psychological enmeshment, any one of which are known as precursors to severe mental health problems in child- and adulthood.

Despite being a mental health problem, there’s no adequate training within traditional mental health curricula. There appears to be only one professionally accredited, intensive and extensive training course in Europe, that also covers the systemic issues associated with parental alienation. That course is run by CAFTT Training.

Alternative labels may be applied initially because it’s currently down to a judge to decide whether alienation is ongoing. Children can be denied early assistance and may soon be severely alienated because court processes are normally too slow to protect them. Parents with these difficulties are often labelled as ‘high conflict,’ or engaging in ‘parental conflict.’ This can mean both parents get labelled as damaging the children because of the deleterious effects of parental conflict on children. However, it’s not uncommon for one parent to be needlessly gatekeeping children from the other, this unreasonable behaviour to be the only source of difference between them, yet both parents be criticised because of 'parental conflict.' Intractable hostility can be applied where one parent engages in hostile child gatekeeping behaviours against the other but seems not to be naïvely, actively or obsessively turning any children against them. Wrong labelling can mean children and families aren’t provided necessary support to resolve issues before they’re extremely problematic, especially for children.

8. Can be wrongly alleged and wrongly diagnosed

On the surface, parental alienation behaviours from a child and an alienating parent seem similar to a child genuinely rejecting or being estranged from the targeted parent. So, as many professionals are not trained in parental alienation or the associated mental health issues, it's often misdiagnosed. The child’s voice has to be heard in legal proceedings, but unless practitioners are highly trained, they may not reliably differentiate an alienated from a genuinely estranged child. Some alienated children express worrying allegations against targeted parents to justify not seeing them. The allegations  may be expressed as a defence mechanism by the child, because they are triangulated and psychologically enmeshed with the alienating parent. It's easier to make allegations than face any fear of the targeted parent induced into them by the alienating parent, so these manipulated children don't have to see the targeted parent. Or the allegations may be scripted because children are parroting what they've been told to say by the alienating parent. Alienating parents themselves may or may not believe the allegations are true. It’s complex. It also happens the other way round, where children were genuinely abused and the abusive parent claims their child has been manipulated to make allegations. It takes detailed, involved and motivated investigation by an expert, combining several forensic and clinical techniques, to be able to adequately inform a court with a reasoned opinion.

Apparently, most family abductions of children are rooted in alienation. There are several associated killings. In the US, a grandmother shot her son-in-law when he collected his infant son for court-directed parenting time. Older teenage children have been manipulated by alienating parents to kill targeted parents. An alienated 10-year-old boy murdered his father in the US in 2011. In 2017, a mother presenting with alienation behaviours murdered her child in the UK on the day of a family court hearing.

Strangely, different countries have different approaches. Parental alienation has been illegal in Brazil for some years. That doesn't mean alienating parents with mental health issues will necessarily go to prison. Brazilian criminal courts took on the powers of the family courts. In Malta, parental alienation was added to child abuse behaviours within legislation of mandatory reporting, meaning it must be reported by professionals or members of the public observing or reasonably suspecting it. In the UK, family courts are generally too overloaded to provide relief to alienated children quickly, and legal cases last for years. However, the new Domestic Abuse Act 2021 proscribes what could be termed as several relevant, alienation behaviours in its statutory guidance, potentially criminalising parental alienation in the UK if the legislation is enacted as currently drafted.